Looking for cheap Emirates flights from or within Nigeria? Instantly compare flight prices and book online 24/7 with Fly-Nigeria, or find out more about this leading global airline here.

Founded in early 1985 and based in Dubai, UAE, Fly Emirates is a leading global airline. Wholly owned by the Government of Dubai’s Investment Corporation, the company is the largest airline in the Middle East. It operates over 3,500 scheduled passenger flights per week from its primary air hub at Dubai International Airport.

As of the beginning of 2017, the airline flies to over 150 cities and 74 countries across 6 continents. It was recently voted to be the Best Airline in the World 2017 during the annual TripAdvisor votes based airline rating survey.

Fly Emirates currently flies to around 152 key cities around the world from its hub in Dubai. Its route footprint
in South and Southeastern Asia is exceptionally strong. Key target destinations include Lagos and Abuja in Nigeria, Cape Town, Durban and Johannesburg in South Africa, Barcelona and Madrid in Spain, Adelaide, Brisbane, Perth and Sydney in Australia, Brussels in Belgium and Toronto in Canada. Additional Eastern destinations include Hong Kong, Shanghai and Beijing in China, Zagreb in Croatia, Prague in the Czech Republic as well as Paris and Nice in France and Munich and Dusseldorf in Germany.

The airline sponsors Cricket Australia, and used to be a sponsor of FIFA and the FIFA World Cup. They withdrew their sponsorship support in early 2015, when allegations of mass corruption within the organization became evident. 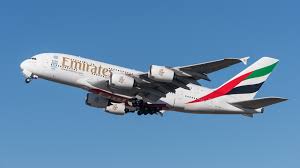 Use the above flight search form to instantly compare airfares and book online, 24/7, 365, or for more information, visit www.emirates.com – NOT www.emiratesairways.com.