Looking for the latest international business class flight specials from Emirates Airlines? Fly-Nigeria.com makes you your own travel agent. Compare Emirates business and first class fares against those of a host of other international airlines and book your own flights online – 24/7, 365! Find out more about the airline’s flight routes, fleet and in-flight experience below, or get started booking your own Emirates business flights using the search engine above now.

The Emirates Onboard Lounge experience redefines luxury business travel. Featuring flat-bed sleeping comfort, sumptuous regionally inspired dishes, fine wines and drinks served in an onboard cocktail bar as well as high speed onboard WiFi and personal mini bars, Emirates can justifiable claim their business class flights to represent the “business of living”. The flat bed seats are now available aboard all of their Airbus A380 and most of their Boeing 777 aircraft.

With Emirates business and pleasure mix only too well. Featuring a spacious cocktail bar, gourmet cuisine and over 2,500 channels on one of the widest screens in the sky, an Emirates business class cabin offer long haul business passengers the perfect place to unwind between international destinations. It is also the finer touches and attention to detail that counts; the complimentary Bvlgari amenity kits, featuring the brands signature fragrances and lotions, will leave you feeling refreshed and pampered, whether you’re travelling for business or leisure.

Whet your appetite for one of the world’s best business flight experiences below:

Not sold yet? Check out Flight Centre’s review of the Emirates Business Class cabin here.

Emirates Airlines (IATA: EK) is one of the two flag carrier airlines of the United Arab Emirates (UAE). The airline has built a reputation as a global leader in the aviation sector, and won the prestigious Skytrax Airline of the Year Award in 2013. It presently enjoys a 4-star Skytrax rating, and is internationally renowned for their service quality and in-flight experience.

Not surprisingly, the airline has been profitable for 25 consecutive years. Along with Etihad Airways, it is one of the region’s premium export brands. Emirates is the largest Middle Eastern airline, operating more than 3,500 flights per week to more than 140 cities around the world.

The airline is a subsidiary of The Emirates Group, which in turn is wholly owned by the Investment Corporation of Dubai. Its primary flight hub is based at Dubai International Airport, from where it flies to 78 countries across 6 continents. It is also the seventh largest international airline in terms of revenues, and the largest airline in the Middle East in terms of fleet size, passenger volumes and revenues. As of 2014, the airline occupies the position of fourth-largest carrier globally in terms of the volume of international passengers carried.

The financial crisis of 2001 was a very difficult time for the airline, as the recession and attack on the World Trade Centre greatly impacted international travel. Lower regional travel, largely driven by international airlines cutting flights to the Middle East, however stood the airline in good stead thanks to reduced competition. 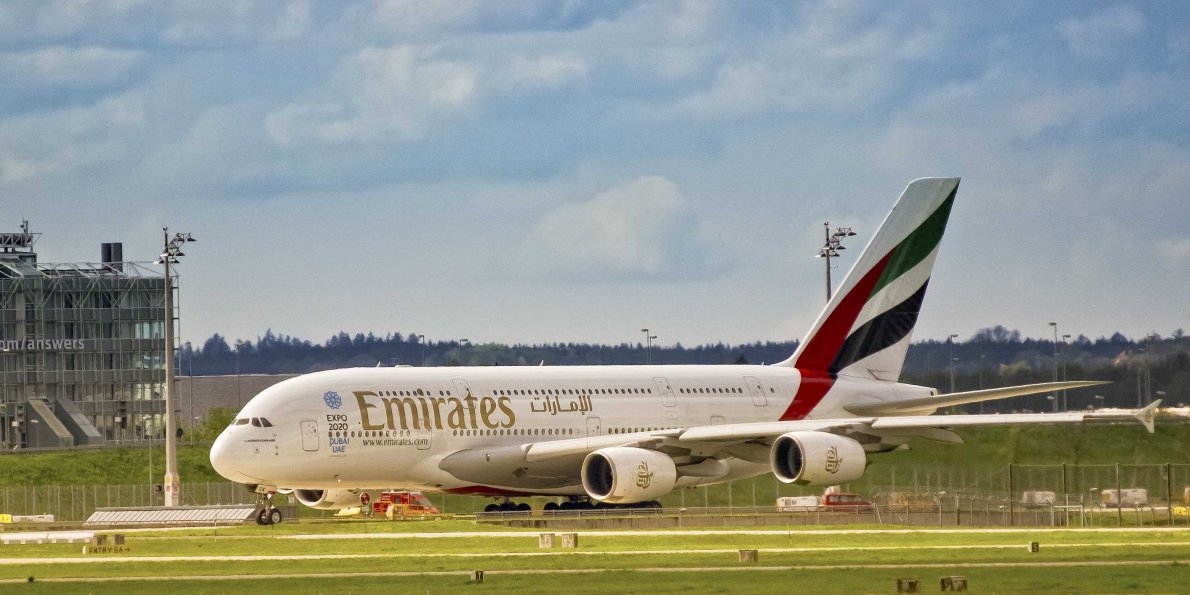 In 2004, the airline commenced non-stop flights to JFK International Airport in New York, deploying their new-generation Airbus A340-500s along the route. It was also in 2004 that the airline’s slogan was changed to “Fly Emirates”. This has subsequently been changed to “Hello Tomorrow”, in 2012.

The airline has increasingly been increasing its market share in terms of South Asian and North American air traffic, enabling travellers to bypass traditional high-traffic air hubs such as Heathrow and Frankfurt.

Emirates is currently not a member of any of the three largest global airline alliances, being Star Alliance, SkyTeam and Oneworld, and has opted not to join these in order to maintain optimum responsiveness and agility in the marketplace.

The Emirates Frequent Flyer Program is called Skywards, and has a current membership base of over 8 million passengers.

As of 2014, Emirates enjoys codeshare agreements with a range of international airlines, including the likes of Cathay Pacific, Air Mauritius, Qantas Airlines, Singapore Airlines, South African Airlines, Thai Airways, Jetstar, JetBlue and Virgin America, to name but a few.

Emirates operates a fleet consisting of next generation, wide-body Boeings and Airbuses. The airline also has an order for 140 Airbus A380 aircraft. In 2013 alone, the airline acquired 200 aircraft.